Round Four offshore wind sites favour locations off the Humber

The Humber remains in pole position to serve up the nation’s future offshore wind ambition, after The Crown Estate revealed its proposed locations for the issuing of new seabed rights.

Southern North Sea, East Anglia and Dogger Bank are three of five regions be immediately included, with further consideration being given to the Yorkshire Coast and The Wash – in which all developments to date operated and maintained out of Grimsby currently sit.

Together, with the Energy Estuary at the heart, they are five of nine regions to be taken forward, with a further nine being dropped from what will be classed as ‘Round Four’ following extensive analysis.

It spells out further potential job creation and multi-billion pound investment as work continues towards 30GW of installed capacity by 2030. Last week also brought an indication of an ‘imminent’ sector deal.

The work just released has seen the entire wider Thames estuary, and the coastline from Dorset to North Wales, ruled out. Significant development constraints have been identified, including defence ranges and exercise areas; visual sensitivity and overlap with busy shipping routes.

Details of the proposed tender design were being shared at an engagement event with developers today. 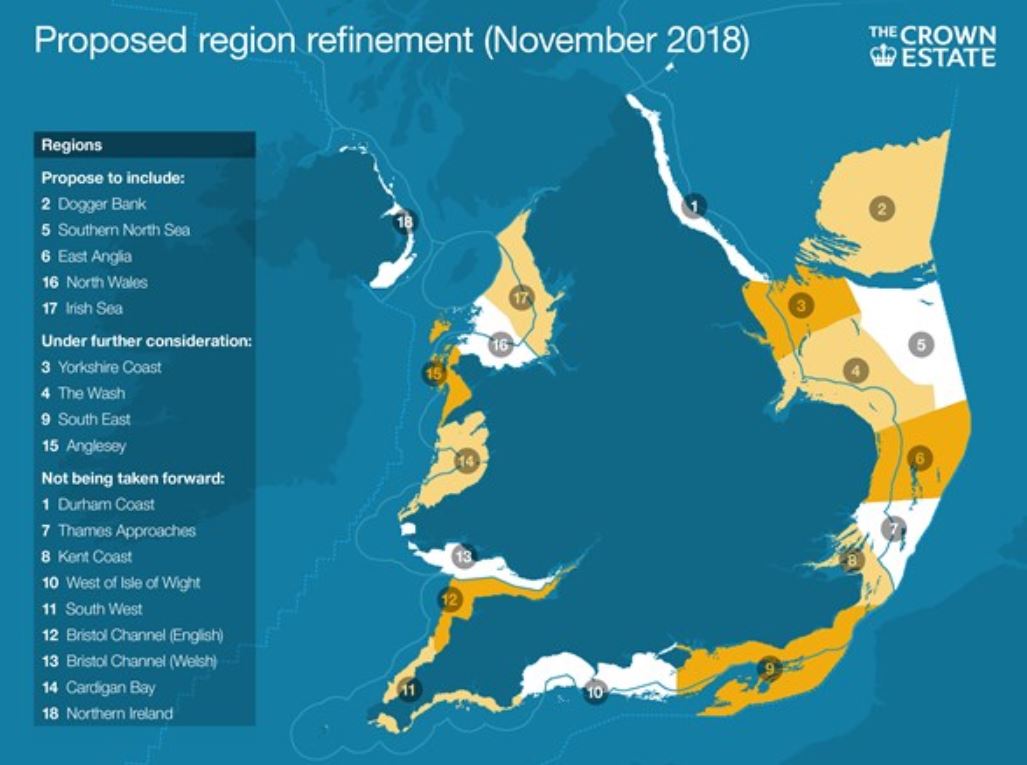 Jonny Boston, senior development manager at The Crown Estate, said: “We are pleased to share the work we’ve undertaken since the summer to refine our initial proposals for Round Four, building on the extensive and constructive feedback we received from statutory bodies and the market.

“To reach this point, we’ve undertaken significant analysis, in close engagement with statutory stakeholders, to help build a detailed picture of seabed resource and constraints around England, Wales and Northern Ireland. We will continue to refine this work as we progress with our plans, helping build the evidence base to reduce consenting risk, balance a range of needs on the seabed, and ensure developers are well placed to bring the strongest possible projects forward.”

The Crown Estate will now work with technical partners and build the evidence base on the nine regions being taken forward, enabling it to finalise the regions to be offered to market, ahead of confirming the launch of Round Four, and later, help to inform developers in their identification of sites.

It is also commissioning additional work on key issues of uncertainty, including further assessments on marine protected area sensitivities, ornithology and visibility analysis.

MORE: How Grimsby was held up as the poster child of offshore wind industrialisation by The Crown Estate

The region refinement announcement has been welcomed by key stakeholders.

Mark O’Reilly, chairman and chief executive of Team Humber Marine Alliance, said: “Grimsby and the Humber already has an excellent pipeline of projects in the North Sea and the possibility of new ‘Round Four’ sites as well as planned extensions can only strengthen the region’s position as one of the world’s leading offshore wind hubs.

“The steadfast commitment to the offshore wind industry by regional stakeholders and business groups such as THMA and GRP is driving long term economic growth across the Energy Estuary.”

Andy Goudie, chairman of Grimsby Renewables Partnership, said: “Grimsby and the Humber ports are in an excellent position to deliver an operations and maintenance hub as a global centre of excellence for the North Sea, with an infrastructure, talent pool and business community poised to build upon our firm foundations.

“The Crown Estate announcements are welcome and supported as we work to deliver the largest global offshore wind farms, in order to secure the country’d green energy requirements.  The needs remain clear, after new analysis illustrates a continuing upward trend in greenhouse gasses, and record temperatures.  It is time to change, and Grimsby and the East Coast are prime for these developments, to deliver investment, jobs, and sustainable development.”

The next phase comes after Race Bank Extension emerged in the final additions to current rounds, pushing the pipeline from Grimsby’s UK-leading wind cluster towards 8GW, as illustrated above.

​The Round Three Hornsea zone, currently in construction and development with Orsted, is within the Southern North Sea region, with Sofia, Creyke Beck and Teesside, within Dogger Bank (having initially carried the name before being split between developers Innogy and a joint venture between SSE and Equinor). With Hornsea already secured and the Danish giant’s East Coast Hub emerging, the latter are targets to land operations and maintenance on the Humber, with a sailing time to rival North East ports, and the benefits of an already-developed cluster.

Sofia, from the same company as Triton Knoll, was granted consent in 2015. It is currently progressing through the latter stages of development, with a final investment decision on the 1.2GW farm dependent on a successful Contracts for Difference result, with the next auction due in May.

Creyke Beck, a two-phase 2.4GW development, takes the name of the onshore substation – north of Cottingham on the outskirts of Hull – which it will connect to. Consents were obtained in 2015, but an application to amend to allow larger turbines as technology developed is currently with the Government. It is being brought forward by SSE and Equinor, so too Teesside,which lands in the North East, as a further 1.2GW project.

The furthest reaches of Dogger Bank have been touted as a potential site for the creation of a power link island to support the establishment of international transmission across the UK, Holland, Denmark, Germany, Norway and Belgium. It could provide assembly and operations support too.  Innogy and Tennet, the Dutch team behind the proposal, announced they were investigating an international wind power hub back in June.

It would support the deployment of larger volumes of offshore wind, strengthen European energy markets and increase security of supply across Europe.

With developments getting further offshore, and technicians increasingly living in the field for shift periods in a model like oil and gas, it could serve as a semi-permanent stepping stone for those anchored in ‘traditional’ port locations.