Innogy’s selection of Grimsby as the operations and maintenance port for the region’s latest wind farm has been welcomed by key stakeholders,

The decision to base Triton Knoll in the town was announced after the German energy giant reached financial close on the £2 billion development off the Lincolnshire coast.

Creating 170 jobs, it will see a base created along quayside on the port estate, with office space, warehousing and crew facilities for those working on the 860MW array. It will also be a main hub for all support vessels travelling to the wind farm.

Long anticipated, a memorandum of understanding has been signed with Associated British Ports.

Simon Bird, regional director for ABP, said: “The River Humber has been labelled as the UK’s Energy Estuary and as this deal shows, that’s for good reason. We’re extremely pleased to welcome the Triton Knoll project team on to the port and look forward to watching the site develop and take shape.

“As well as the expansion to our existing showcase of excellent wind farm facilities, we’re most pleased at the prospect of further increasing employment in and around the port.”

Offshore construction is due to start in 2019, with the site anticipated to be fully commissioned by 2022. 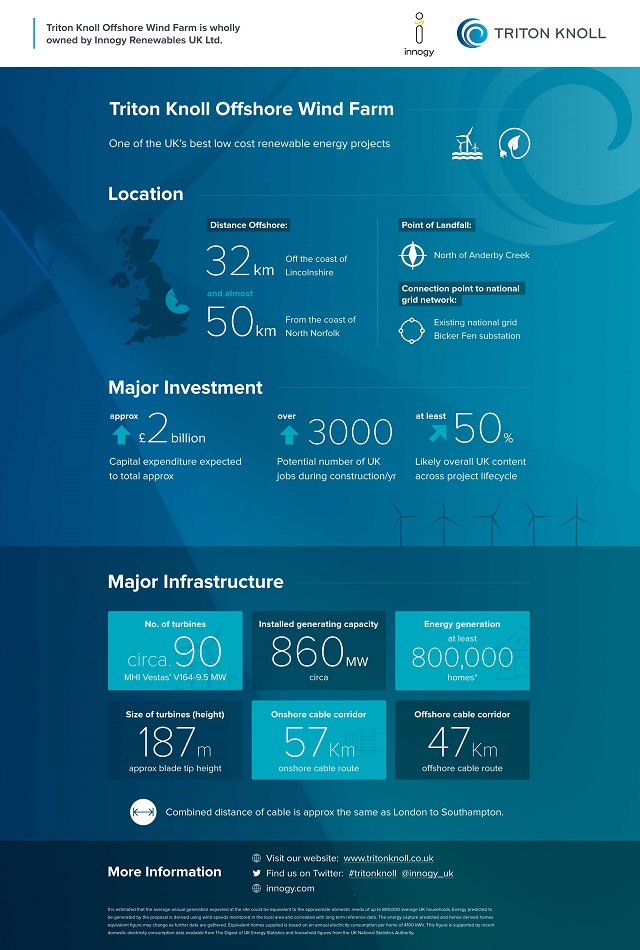 Together with the Hornsea zones also now in construction and development, it will play a key part in lifting the town’s installed capacity from the current 1.5GW to virtually 5GW – enough electricity to power five million homes.

Cllr Peter Wheatley, Portfolio Holder for Regeneration, Housing, Skills and Assets at North East Lincolnshire Council, said: “This is excellent news, once again, putting Grimsby at the heart of the long-term renewables operations and maintenance industry in the UK. This is another company recognising the potential that the Port of Grimsby has in providing a viable future for companies to invest and expand.

“We’re developing great relationships with the company in terms of helping train people for the jobs being created and also to support the local supply chain.”

The exact location is expected to be confirmed later this year, with contracts then signed, though Royal Dock – alongside Orsted – is anticipated.

And the potential neighbours have already struck up a deal, with Grimsby’s biggest inward investor in the sector having signed a power purchase agreement with Innogy for its entire output in the first 15 years of generation.

Once the offshore wind farm is operational, the Danish giant will handle the intra-day fluctuations in volume and prices, balancing the power into the grid.

Morten Buchgreitz, executive vice president for Ørsted Customer Solutions, said: “Ørsted acknowledges Innogy as one of the most successful European energy companies. As we do ourselves, Innogy relies on the expansion of renewable energy to grow its business activities and fight climate changes. Therefore, I’m proud that Innogy and its partner companies have entrusted us to handle a 15-year power purchase agreement. I’m very much looking forward to our co-operation.”

Hans Bünting, chief operating officer for renewables at Innogy, said: “We’re confident that our flagship Triton Knoll offshore wind farm has robust, financial security at its heart. The successful delivery of this arrangement with Ørsted also demonstrates the continued success of Innogy’s ability to forge valued, strategic partnerships as we continue to grow our offshore portfolio across the globe. While we may compete in some areas of renewables, I’m delighted that we’ve secured this co-operation with Ørsted and look forward to working closely with them in the future.”

Firm orders have now been placed for the world-leading MHI Vestas 9.5MW turbines, a record deal for the manufacturer, as it announced yesterday. They will be shipped from Denmark to Able UK’s Seaton facility, where pre-assembly works will take place ahead of sail out to the farm.

It had been hoped this would take place at Able Marine Energy Park, where hopes for major job creation in the sector have yet to be realised.